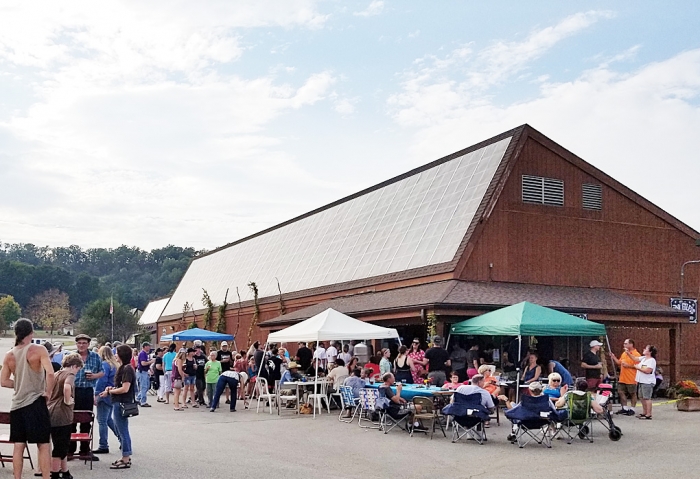 When the Driftless Brewing Company opened for business in a former grocery store in Soldiers Grove in March of 2014, it was with future expansion in mind.

The future is now here with the official announcement on Tuesday afternoon that the village of Soldiers Grove will be receiving a $125,000 Wisconsin Economic Development Corporation (WEDC) Community Development Investment Grant to help with the brewery’s planned $1.2 million expansion from a one-barrel brewing system to a 15-barrel system. A 70-seat educational taproom will also be a part of the building at 102 W. Sunbeam Boulevard, said Business Operations Director Cynthia Olmstead.

“A thriving downtown is key to a community’s overall economic strength and each of these projects will help bring more visitors downtown, which will provide a boost to nearby businesses,” said Kleefisch in a WEDC press release. “The state’s investments in these community development projects are designed to establish a firm foundation for future economic growth.”

WEDC grants for $250,000 each were also awarded to the city of Tomah and the city of Rice Lake.

Olmstead said the Driftless Brewery expansion is expected to be completed by early 2019. She said that the popular tours of the brewery may have to be temporarily put on hold, or perhaps held less frequently, while the expansion is underway.

“We will have a much nicer facility,” said Olmstead, who noted that Driftless Brewing will be expanding within its 7,000-square-foot building and no additions are needed.

The Driftless Brewing Company will be hiring people within the next five years, said Olmstead. Plans call for adding six jobs initially and up to 12 full-time and part-time positions within five years.

“We’re happy to be announcing our 15 BBL brewery and taproom expansion today.   The WEDC grant to the village is a crucial part of our funding package that totals nearly $1.2 million for our equipment and building renovation,” said Olmstead. “Driftless Brewing Company hopes to be a catalyst for economic development in Soldiers Grove and beyond through bringing more customers to village businesses, creating jobs and supporting farms, co-ops and businesses throughout Wisconsin when we purchase ingredients and equipment.”

“In a few short years, demand for our beers has far exceeded the current small production capacity and we are fielding requests for our products from as far away as Milwaukee, Minneapolis, Des Moines and Chicago,” Olmstead said in a Driftless Brewing Company press release. “Our expansion to a 15 BBL brewery will allow us to serve customers throughout southwestern and southern Wisconsin and provide a destination brewery and taproom for those seeking quality, local craft beer in the Driftless Region.”

Olmstead also credited Driftless Development Corporation’s Jim Bowman for supporting the project. “He’s been a big help to us,” she said. He was invaluable during 2017-2018 in assisting with the final funding acquisition.”

“This project is one example of the economic development work Driftless Development Inc. has provided with financial solutions of $250,000 in funding including the WEDC Grant that allowed the owners to fully secure $1.2 million,” said Bowman.

Olmstead said most of the new equipment for the expansion will be purchased through Wisconsin manufacturers (Quality Tank Solutions) and the building renovation team, led by Scott Chyco of Delta 3 Engineering of Platteville, are all local or regional contractors.

The Driftless Brewing Company has always prided itself on using the finest local and regional ingredients; environmentally-progressive production and marketing and a passion for artisan beer-making that is communicated to its customers across the state.

They use local and regional businesses, co-ops and farmers for 95 percent or more of their ingredients. Their beers, in name and taste, reflect the rich abundance of the Driftless Area and many of ingredients are sourced within a few miles of the brewery, including fruits and berries picked by the brewery’s staff. Brewer Chris Balistreri’s collaborations have included working with a wide variety of other businesses in the area. One of the most popular has been the milk stout Cow Cult, a local favorite and a collaboration with Organic Valley. With the release of Driftless Brewing Company’s Deep Rooted ale this month, the brewery is the first in Wisconsin to brew beer with Kernza, a perennial wheat grain that shows promise as a deep-rooted perennial for soil conservation and forage, in partnership with Plovgh (www.plovgh.com).

With labels such as Kick-Axe Pale Ale, Dirt Brown Ale, Metamorphosis, Solar Town Stout, Rolling Ground IPA and The Local Buzz, the Driftless Brewing Company has made quite a name for itself with its alive, unfiltered and unpasteurized beer. With the expansion project now moving full steam ahead, everything will only get better.

“We believe Driftless Brewing Company is poised to become one of the leading craft breweries in our region and a growing force in the Wisconsin craft brewing industry,” said Olmstead.

Driftless Development of Crawford County has contracted with the University…

© Copyright - Driftless Development - All Rights Reserved 2022
Back To Top
×